Originally part of the bigger Wyloo Station, in 2001 Evan and Robin Pensini established Cheela Plains as its own individual station with a vision to be industry leaders in sustainable and renewable pastoral practices.   Through decades of hard work and diversification, Cheela Plains Station has evolved. Cattle are seasonally managed and remain an integral part of station life.  Outback tourism is flourishing and growing every year.  But at the heart of the Cheela Plains story is the Pensini family; dedicated to the custodianship and conservation of keeping the pastoral rangeland in excellent condition for future generations.

Evan was 12 when his parents bought Wyloo station and moved north from their family farm in Mogumber. He attended Guildford Grammar School as a boarder, leaving at the end of Year 10 and began working on the station at the young age of 15 in 1979. Mustering in those days was done by tracking which started at the far eastern end of the property, walking cattle along a long, dusty 130km back to the Wyloo homestead. This allowed Evan to gain an intimate knowledge in the lay of the land where he worked alongside indigenous workers employed on the station. Over time various other mustering aids and methods have been introduced such as radios, fixed wing aircraft and now helicopters along with the addition of better roads, more paddocks, cattle yards and water points making mustering much easier today. In 1987 Evan gained his fixed wing license and spent many hours aerial mustering Wyloo giving him an even greater perspective of the land and river systems.

It was in some of the 50ha holding paddocks, used exclusively only at mustering times when mobs of cattle would graze them for short periods, that Evan noticed there was a better grass recovery than the continually grazed open paddocks. This kickstarted Evan’s transition to a more formalized rotational grazing system. In 1998 Evan attended a Grazing For Profit course where he learned the principals of rest based grazing and soon set about implementing and developing those practices to improve paddock utilization and gain even greater stock control in order to control mate the herd. The first major change was developing a four-paddock rotation on the Cheela Plain in 1999. 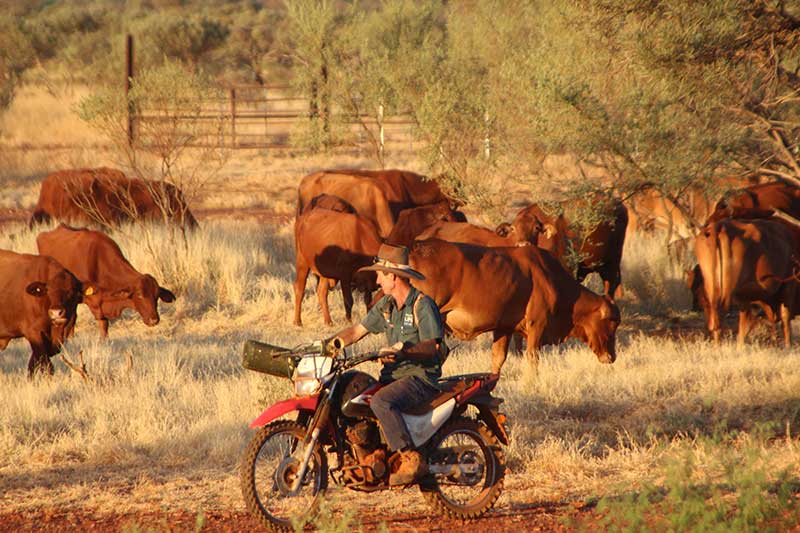 Robin grew up on a Texas cattle ranch, that strongly resembles WA’s Southwest agricultural area, where she was very involved with helping out on the ranch. At the age of 12 she began competing in rodeos and went on to win the Texas High School Rodeo All Around Cowgirl and the National High School Rodeo Breakaway Roping Championship as a Year 12 in 1987. Robin’s love of the land, cattle and horses led her to study Animal Science at Texas A&M University where she completed a Bachelor’s degree in 1991. After finishing her degree, she took some time off and travelled to Australia to learn about and experience the beef industry in Western Australia. She organized work experience placements through Muresk Ag College in Northam and set off an adventure that would change her life. Wyloo Station, 180kms west of Paraburdoo was her first placement.

Following the rain, mustering came to a standstill which gave Evan time to concentrate on more romantic inclinations, and the rest is history. After finishing work experience Robin went back to Austin, Texas to start a career in beef promotion. Over the next 3 years she and Evan kept in touch through phone calls and letters until Evan travelled to Texas and proposed! The decision was made that Robin would move to Wyloo and live through a summer before deciding if she could manage the isolated station life prior to committing to marriage. Plans changed however and they we married on October 3, 1994 at Kings Park, just three months after moving to Wyloo. 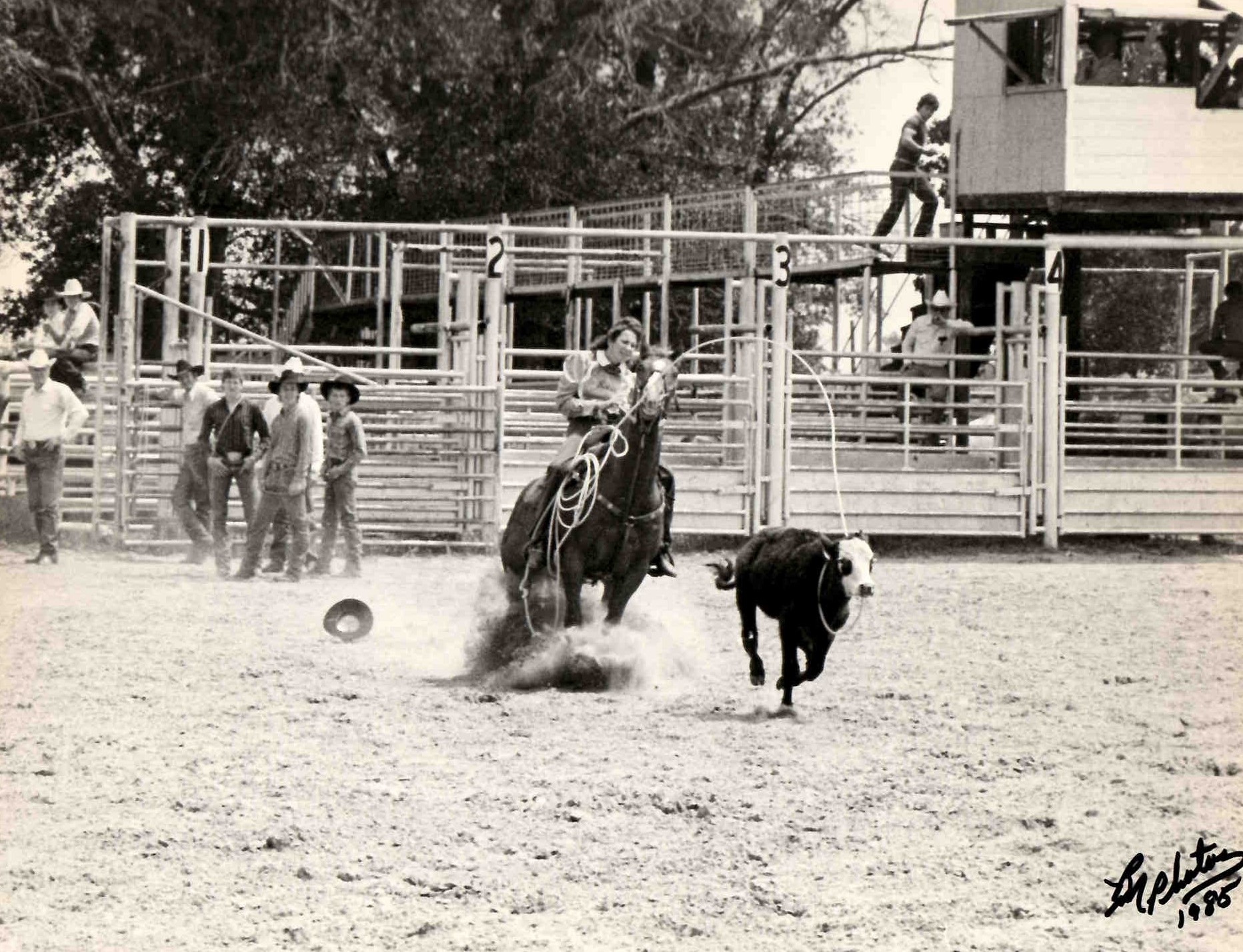 This letter home explains Robin's first impressions of the station. 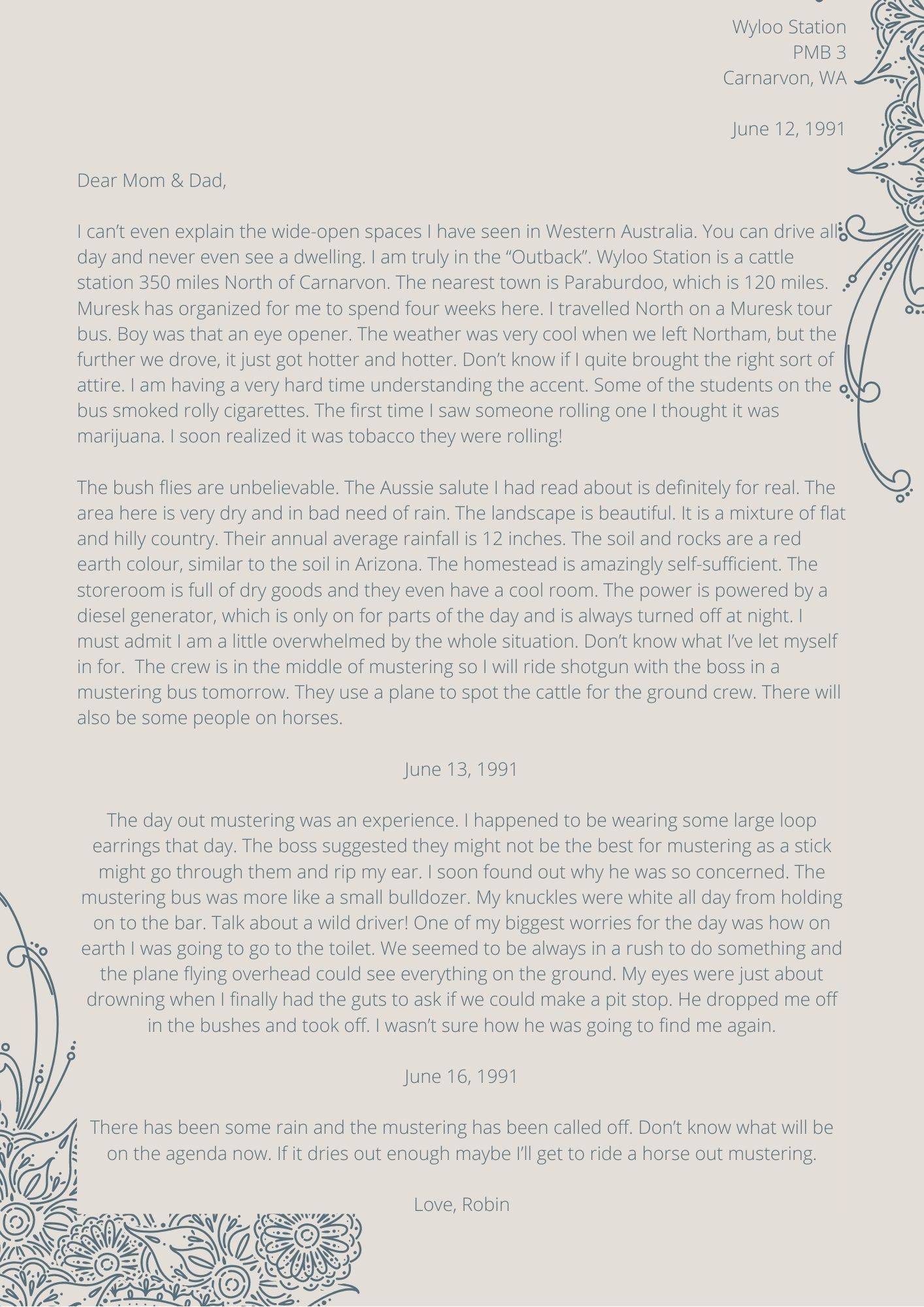 Adjusting to the climate proved to be a bigger challenge than the isolation for Robin. She had been told that in the Pilbara there was winter and summer and not much in between. There was no air conditioner or even a fan at the homestead so surviving the first summer of continuous 46 & 47 degrees for weeks on end was a challenge. The diesel generator was run for power and to save on fuel and it was turned off for 4 hours during the morning and at 9pm every night for the entire night! With Robin moving to Wyloo it also meant that she would be cooking for a staff of anywhere between four and fourteen people every day of the year. A chore she had little experience with!

In 1996, Evan and Robin’s first bundle of joy turned out to be twins when Fraser and Gavin were born, and three years later in 1999, Lawson was born.

After nearly seven years of marriage, in 2001, Evan and Robin established Cheela Plains as its own station and continued the rest-based grazing management system that was started in 1998. There was no house to live in so they set up four sea containers with a roof over them to live in which over the years and several renovations later has turned into a beautiful family home that they are tremendously proud of which is fully air conditioned and powered by a hybrid solar/diesel generator system!

Developing the station from building the homestead to setting up quarters to building yards to everything in between in an isolated area continues to be a challenge but add to the mix the implementation of emerging ideas for rest-based grazing, life wasn’t plain sailing. Evan could see the benefits to the country and caught the subdividing bug and went from four to 12 to 40 to 65 paddocks all while raising a young family of four boys. The youngest son, Preston, was born in 2005.

Living so far from town meant the children had to be educated at home through Port Hedland School of the Air. When the twins started Pre-Primary, air lessons were done by radio which was near on impossible to hear due to the geographical barrier of the Hamersley Ranges, the crackly reception and faint voices of Indonesian fisherman. Thankfully, when the twins were in Year 2, computer conferencing replaced the radio and the speed of advances in technology have never looked back. As the third son entered the schoolroom, the days became even more challenging, but when number four came along she can only describe it as absolute utter chaos! Evan and Robin followed family tradition and sent the boys to Guildford Grammar School as year 8 boarders. The three eldest are now well on their way to completing degrees in their chosen careers and Preston is in Year 10 looking forward to planning this journey.

Growing up the boys were out and about on the station as much as possible. If Evan needed a hand during the week, school was called off for the day but was generally made up on the weekend. While it was difficult to recognize it at the time, Robin teaching the boys provided an intimate opportunity to understand their learning styles and tailor specific programs to accommodate their various needs. Being with them in the school room 24/7 day in day out for 17 years was tough at times but she wouldn’t trade those memories for anything in the world.

In 2010 following an extended Pilbara dry period, Evan and Robin took the then unusual step of destocking completely. Having spent the last 33 years building up a breeder herd this was an extremely emotional decision to make, but they packed up the family and moved to a pastoral property near Alice Springs for two years leaving Cheela in the hands of caretakers. Just as their paddocks at home were resting and recovering, so were Evan and Robin. 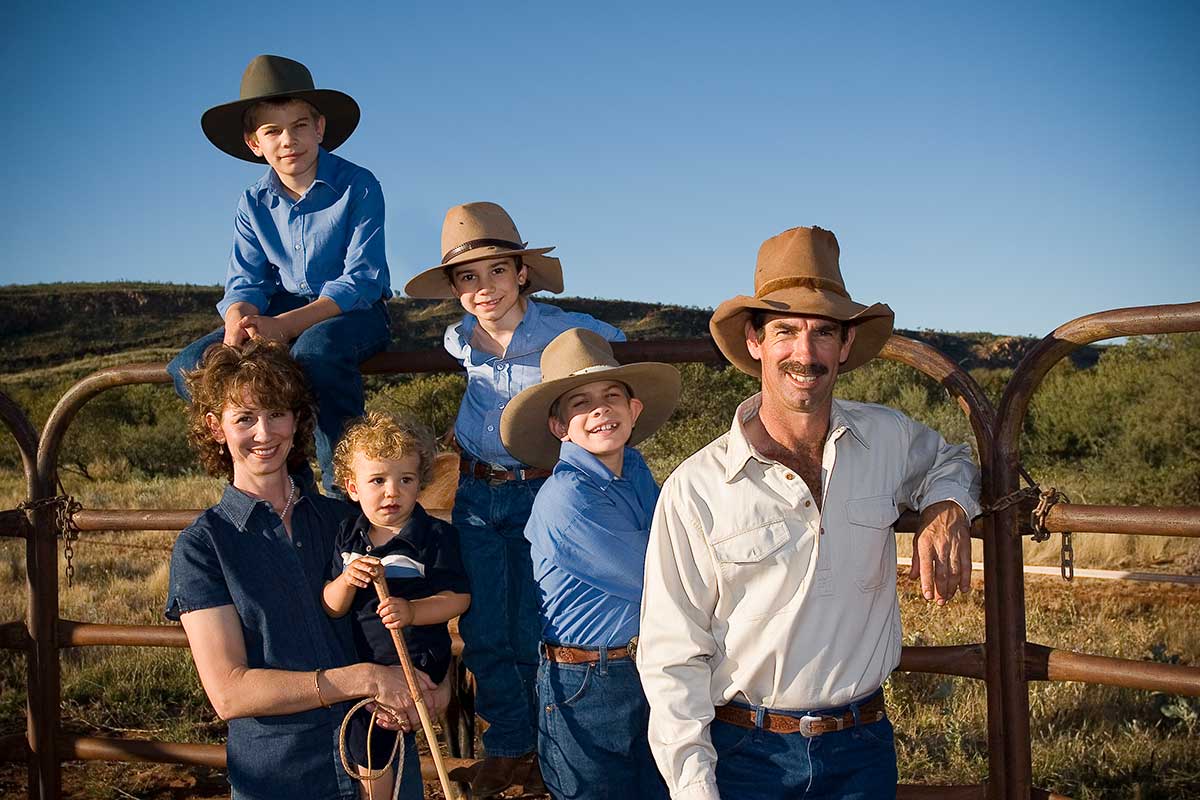 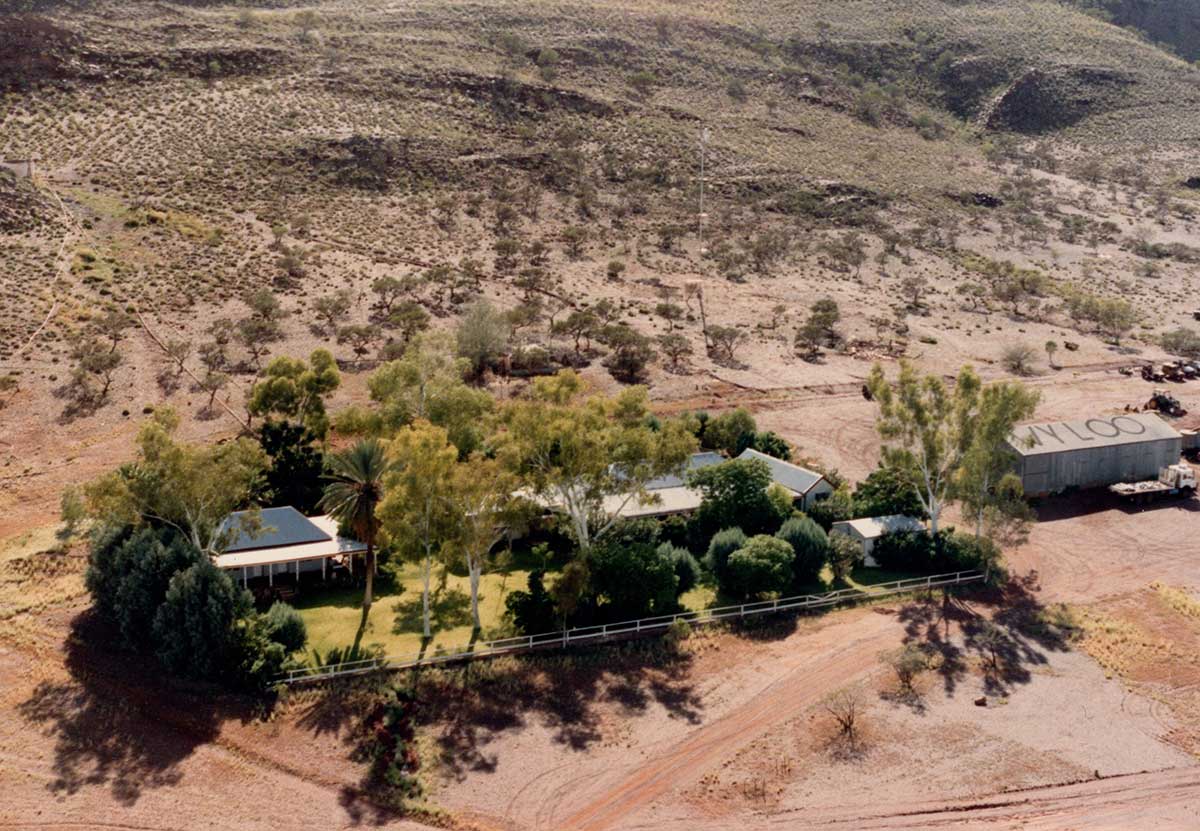